Howdy y'all, Ian here with an update that will make some of you happy and some of you upset. Regardless of how you feel about this, since the introduction of resources, Heroclix has changed a lot in a short amount of time.

So without further ado, I present:


(As a brief aside: I'm only highlighting powers which are changing. If it's not listed here, it's not different. I also included meta-game changes that will become important concepts with these changes.)

Mind Control: Pushback at 150 points, only 1 pushback click regardless of points over 150.

Force Blast: May add knockback to any attack. (Not to editorialize, but this makes a formerly useless power now an intensely potent one.)

(NEW) Sidestep: Give this character a free action, it can move with a locked speed of 2. (This power is the new hypersonic. It's ludicrously amazing.)

Hypersonic: Does not breakaway automatically. Adds 2 to breakaway roll.

Energy Explosion: When this character is given a ranged combat action and deals damage, an area of effect may include all untargeted characters adjacent to one or more hit targets. Hit targets are damaged normally, other hit characters are dealt one damage for every lightning bolt printed on the attacker's dial. (Per typical WizKids, the wording in the PAC is mildly unclear. As it reads, damage is dealt normally per printed damage, and the "splash" damage onto adjacent opposing figures is dealt as whatever the amount of lightning bolts is.)

Super Strength: Characters may either pick up or place an object it is holding. (This is a huge, but minor change. Characters can now set objects down as well.)

Smoke Cloud: Place six hindering markers, all within range, minimum range 4. Characters that occupy these markers modify their attack by -1 unless they can use Smoke Cloud or ignore hindering terrain for line of fire purposes.

(NEW) Precision Strike: When this character makes an attack, it can't be evaded, and the damage dealt cannot be reduced below 1 or transferred.

Telekinesis: A and B must be within 8 squares of eachother. Must be a single base and either be standard damage combat symbol or tiny combat symbol. A character placed by TK cannot use TK this turn.

Combat Reflexes: This character ignores knockback damage. (At long last they've cleaned up the small part of the power that no one cared about.)

(NEW) Invincible: Half of damage dealt to this character is ignored. (I'm lukewarm about this. It sits on a weird intersection because, per Heroclix rules, damage of 1 would be rounded off to 1, so a character with invincible wouldn't even ignore the same damage toughness would. On the other hand, it drastically reduces monster hits. I imagine many a special power will combine this with impervious.)

(Below contains 3 changes that will more or less redefine huge swaths of the support metagame. Probability control, perplex and outwit now have a minimum range of 6, but are otherwise keyed to a character's range. This has obviously huge repercussions.)

(NEW) Empower: Acts the same as enhancement (+1 to damage), but for close combat attacks.

I haven't posted to the blog itself in months! I'll try to fix that soon. If nothing else, I'll showcase some of the scenarios for events run in the area over the past few months in case you want to try the at home.

If you have requests on some brig articles, like how to use a power or figure with done unique traits let me know.

Please enjoy this recording of the 2012 Alliance Retailers' Summit presentation. Share with your friends, and let us know what you think. 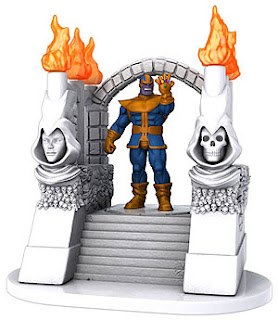 Any thoughts on the Thanos event series as it was run locally? We had two venues participate, would you have preferred more? Did the series "pay off" as well as you would have liked in terms of a fun and competitive experience. Note down your experiences and thoughts here if you wish.

Anonymous commenting will be allowed on this one.

How lucky are we still!?!

Back with the inaugural issue of the MichianaClix newsletter back in 2008, we started profiling all the great local venues that hosted HeroClix and Wizkids Events in our area. Today we continue that by welcoming [back] the newest local HeroClix venue, Bower St. Cards and Games in Elkhart. 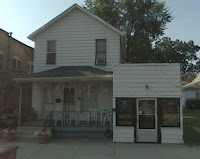 Bower St. opened in 1993 with an emphasis on Magic and other CCGs. They have in store gaming areas with room for about 20 players. During the first integration of Wizkids’ Organized Play for HeroClix, Bower Street was a venue for both HeroClix and MechWarrior for a time.

Recently, they’ve started supporting HeroClix as an Organized Play venue again!  This is great for out Elkhart based MichianaClixers. Bower St. is just west of downtown Elkhart, north of the river.

Currently, they are just testing the waters with Infinity Gauntlet events, but if they get a good response, they’ll open up to more OP. They’re open Friday from 5:30 to 10 pm and Saturdays from 11 am to 4 pm, with events on at least one Saturday a month.

Star Trek: Tactics is out today!

Star Trek: Tactics hits shelves today.  To help track down all the ships in the fleet, here is a handy, full page, checklist.

Posted by Jon Loftus at Wednesday, February 01, 2012 No comments: